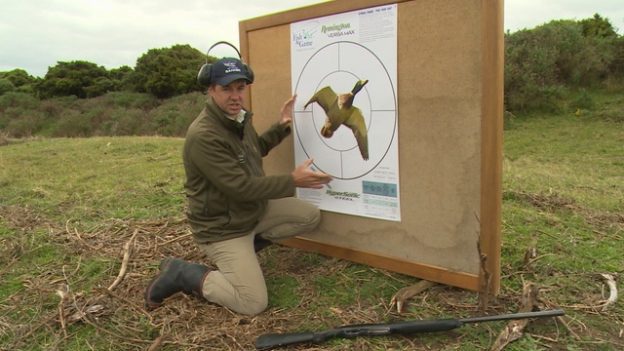 With the purchase of my new gun the Beretta A400 Action I thought it would be good pattern it and see what is happening with the steel loads we are using.

Our first test was at 30 metres with Modified (1/2) choke using the loads to see how they compared. The Gamebore had 180 pellets in the 30″ circle with the B&P having 181, this is pretty close to double the smallest count of 95 pellets for a clean kill, some may even say overkill. The loads were so similar we continued to only test the B&P as we are getting to the last of the Gamebore.

The B&P at 30 metres with Modified Choke

As the picture to the right shows at 30 metres, it is very tight. At distances less than 30 metres, it does not leave much room for error. This is good for my opening weekend as the pond we shoot the average distances are around 40 metres.

At 40 metres the Modified choke was still putting 135 pellets within the 30″ circle, with that, I am pretty confident taking birds cleanly out to that distance and a bit further past.

With all this information I feel that I am better off in making decisions on what choke to use to improve my success rate.

I feel that 1/4 choke will be perfect for night shooting where you are going to struggle to see them past 30 metres and more likely at about 20 metres.

An interesting side note was the Modified choke the wads stayed as you would expect. But with the Improved Cylinder, the fingers of the wad turned back on themselves. I do not think this would impact the patterns at all but was an interesting note.

Only time will tell if what we have found on the paper holds true when out in the field and not long now till we can find out.