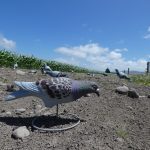 I went with my Father-In-Law to try and hunt some pigeons that had turned up on some freshly drilled maize. The contractor had missed doing the other ring so that was already some stalks growing. The farmer had said that there were 20 0dd pigeons hanging around so we thought we would go for a look. This would be the first 2019 pigeon hunt, hopefully not my last.

Because of time issues we were not able to scout the paddock they were going or flight lines. This turned out to be a mistake as we ended up setting up in the wrong part of the field. We set up where a couple of birds were with our hide in the maize.

Hopefully there will be some more hunts back at home, just got to get time to go and scout them.