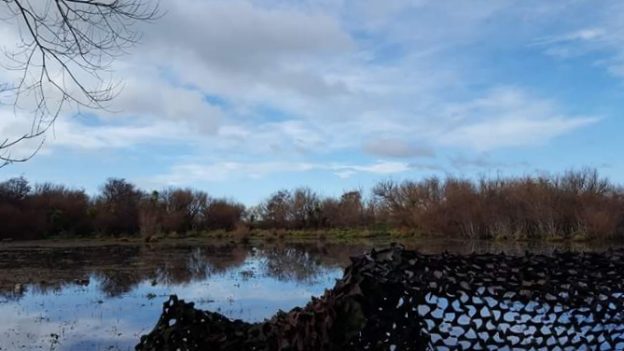 Well, the 2016 duck hunting season has finished for me this was the final duck hunt of 2016. There is another weekend to go in the Wellington region but I will be on call. Should be a good chance to get some of the chores done around the home that I have let slip the last few weeks.

Justin and I got over the hill to hunt another new piece of ground we had found. It is a lovely flooded piece of water that is mostly only about 300mm deep with plenty of feed.

Thanks for the photo Justin, it was a pretty good nap

When we turned up we could hear a few birds in there. I was hopeful that something should turn up, with fresh feathers covering the water.

As the morning dragged on and not much was happening. I started to get more and more worried that this was turning into another dud hunt. But with leave approved from the wife to stay over for the day we were pretty committed to sticking to it.

By midday, we went for a walk and looked at another couple of hides and found some roosting ducks. They were a bit far away but it was a good reconnaissance to check possible spots for next season. Justin went for a crawl to try to stalk some paradise ducks.

Not much happened in the afternoon except for a pair of paradise ducks were trading back and forth but were about 20m past my range.

As the weather came in a few ducks started to fly did not seem overly interested in our spot I started to get a bit nervous that nothing was going to happen. I kept telling Justin they will come but minute by minute I was starting to worry that it was not going to happen.

But as the sun started to set and it started to get darker, we had a pair come in but land in a corner away from us. I made the call to go and start by a small tree over that way. That call ended up paying off with more and more birds turning up.

Got buzzed by a pair of birds and by the noise of the wing beat I knew straight away that they were a pair of Shovellers. I was in and the next pass, bang one down. I ran straight over to it and it was a beautiful Shoveller Drake. A bird I have been actively hunting for four years and in the last 20 minutes of my season, I got one. Having missed a perfect opportunity on opening weekend I was feeling very proud. I stopped shooting then as my season my complete.

Quite a few more birds flew in that Justin gave a good go at.

All up we ended with 2 Mallards, a Grey Cross and my Shoveller Drake. It was a nice way to end the season and we have learnt that this spot is great for an evening shoot and found a couple of other hides to try next season.