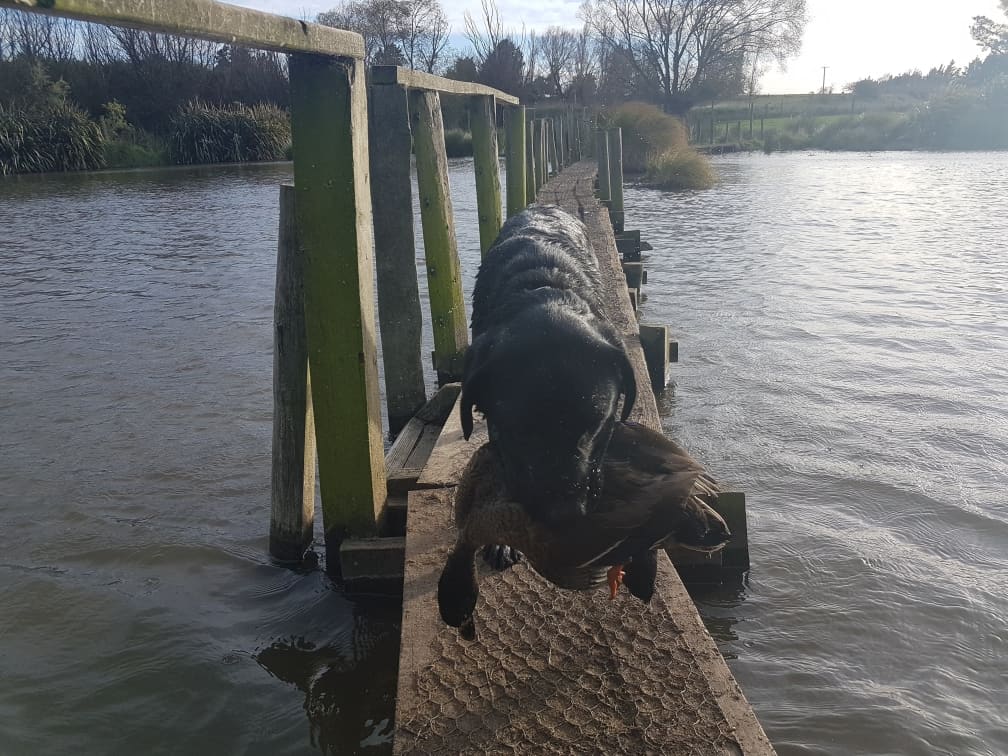 It is time to look back at my 2018 duck hunting season, it can be summed up with ups and downs, with my main focus on trying to get Ace as much work as I could and to re-enforce the off-season training. Even after 20 plus years of actively hunting ducks, I am still learning and I believe that you will never know everything.

It started with the annual trip down South to my Father-in-laws property. This year It was only a long weekend with my possible leave available from work so was back home on the Monday. It was a great weekend with my dad, Cameron and I back into the main hide again. It is always good to be able to hunt together, plenty of banter thrown around especially when you start missing.

The weather for the weekend was slightly overcast with winds from the North which made us work to get the birds to commit as the hide is more set up to hunt with a Southerly. But we were able to get a few to land and then take the shots as the birds circled overhead which allowed the guys in the other two hides to get some shooting at the birds trying to escape. It was another great weekend and that has a lot has to do with how well my Father-in-law manages the pond.

I’m getting out of here

Duck committing to the pond

Ace working on a good retrieve

Chase is on the case

Ace looking happy to be out

The Cupped Winged Calls helped get the Drakes in range.

Raumoa, Cameron and I with a few of the birds

Chase is on the case

Ace eager to get get a downed bird

Ace having a great time looking for birds

I was unable to get out as much as I would have liked with there being seemingly never-ending sickness in our house but I was able to get out a few times and try a few different places around the region.

One of my work mates Matt, was keen to head out and try for a duck so I put a plan in place for what would hopefully be an easy place to hunt in at Molly’s Dyke without needing waders. Heading in there was not as much water as I was hoping for in the paddock but we were able to find a small puddle that had some fresh feathers in it. We tried to set up the pop-up blind from Hunting and Fishing but found that in the bumpy ground and strong wind it was unable to stay up, we set up beside some rushes to hide as much as we could. The hide will be ideal for the paddocks hunting pigeons, ducks etc.

We did not have to wait too long for birds to start moving, I had thought that they would be moving off the lake and into the paddock to feed but most were heading back to the lake. I was able to get a few over to have a look with some pretty aggressive calling using the Cupped Wing Calls “The Mutt” and had some shots but we were unable to make any of them connect. Ace was not impressed, but I think it gave Matt an insight to hunting ducks and hopefully next year I can get him out onto some more.

Ace asking where are the ducks

Looking across our little bit of water to the Remutaka Ranges

Sunset back across the Wairarapa

I took a Friday off work to head up the coast to see if I could find any Pheasants, after talking with Fish and Game they recommended a few spots on river banks but have never been to them before and the amount of rain preceded this I decided to head to the Tangimoana Scenic Reserve as it was available to hunt during the week.

It was a great place to go and having both Ace (Labrador) and Rain (the wifes Border Terrier)  was good, Rain hasn’t had any hunting training but he soon caught on to what was happening and loved to get into this tight places that Ace was not overly keen to get into. We found some sign of birds and followed the tracks until the ended and unfortunately the dogs lost the scent. But I know they are in there and I am hoping to head back before the end of the upland game bird season.

Ace and Rain loving it

The following day I meet Justin over at Boggy Pond, the hide we were planning to hunt the stand holders were already there and we went into a different hide that was not ideal with the wind conditions. The birds did not really want to work for us and wanting to land further in the middle of the wetland. I was able to scratch a couple of birds out, again “The Mutt” worked to get a Mallard drake that was sitting in the reeds beside us to decide to come and have a look, he won’t be making that mistake again. We were able to get birds to start working us but I am certain that they were seeing us as they would simply drift further away.

Anywhere in the lips

Got to love the colours of the Grey Duck

Over summer I am going to have to dedicate some time for some scouting and possibly building a sneak boat to be able to access more areas to hunt.

I ended my season with a morning hunt over at Boggy Pond with my Dad down from Auckland for the weekend. It was nice to be able to spend the morning with him, apart from opening weekend it is quite hard to get to hunt together. With it being a Northerly wind again we decided to walk into Boggy Pond from the Northern side, somewhere I haven’t walked into. It was actually a reasonably easy walk in and there was a sign of ducks being there.

Dad did not have any waders so we had to sit on the outer edge, again the ducks were not committing to us wanting to land further out but we had the opportunity at a few pairs. Dad being the good shot he is got a couple down, I was unable to capitalise on them though.

The two Berretas at Boggy Pond

Look out over Boggy Pond

Dad and I at Boggy Pond awaiting the ducks

We had pigeons fly through most of the morning which added to the hunt being able to shoot a couple of those. Ace had to work to get the ducks as they landed in the fallen logs and with the wind was hard to scent. I have some more areas to work on as he did like jumping into the water with a duck in his mouth and would rather push through the Raupo and reeds. I was happy that he never dropped the bird.

All in all, it was a good season, lessons learnt with some things to work on before next season.