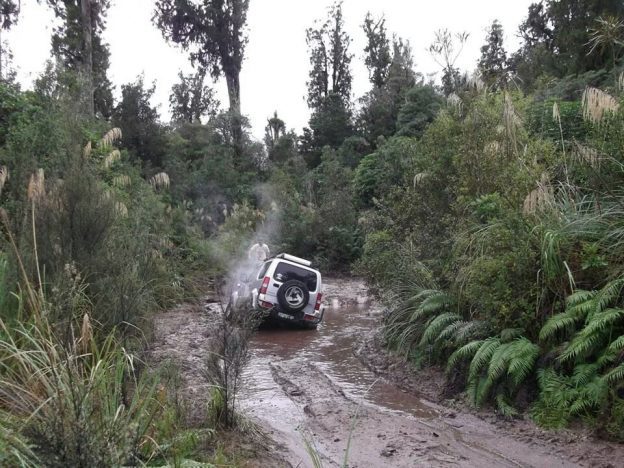 It has been a busy few weeks again, we were lucky enough to get up to Lake Taupo during Easter weekend where the storm did not really hit.

Centre of the North Island

We went for a drive to the Centre of the North Island which is located in the Pureora Forest.

Along the way, we drove past a mud puddle and with the new tyres thought it would be interesting to drive through it.

We jumped out and walked around to check the depth. As you can we should have checked a bit further to the right. It was a bit of freak out moment, I thought it was going over.

Was very gutted my in-car camera missed this fun as the SD card got corrupted.

I had organised a morning out on a charter boat to chase some trout. It was a success with fun had all round with each of us landing a fish. I was getting a bit frustrated as I caught mine just as we were packing up.

I have to apologise to the girls who did not get their photo taken with their fish. It was also the first fish ever caught for one of them.

Here is a bit of a video of my wife playing with a trout heart as it was still beating, I found it a bit gross.

The opening weekend of the duck hunting season has just passed. The weather was not very good for the hunting of ducks, clear skies and zero wind. It was good for the farmers around the area as they have experienced very high rainfall for the last few weeks so hopefully dried the ground out for them.

Here is a couple of photos of the pond before the weekend, we estimated ~500 birds on there.

I struggled to get onto the birds and did not shoot very well, the others in our party of 7 made up for that with some very good birds being taken.

On Sunday we had a surprise Goose turn up to the pond, just sneaked in without a sound and was on the water before we even knew he was there. Needless to say, he did not make it back outside the pond after a few nervous shots from the other end of the pond.

Here is my first attempt at making a video using my barrel camera, it is a bit shaky, not the best filming or shooting either.