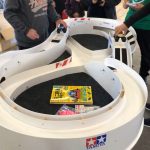 Last weekend the Wellington Mini 4WD club ran a special event building and racing the Tamiya Wild Mini 4WD cars. We all started with a random Wild car, there were the Wild Saurus, Nissan Terrano 93, Toyota Hi-Lux and Toyota 4-Runner.

I ended up with the Toyota Hi-Lux but wanted either the 4-Runner or Terrano. One of the guys wanted the Hi-Lux so I swapped for the Terrano. I used to own a matt black Nissan Terrano.

We all built our cars while having a munch on some pizza without seeing the track. I haven’t built a Wild Mini 4WD in 20 years, so had to make sure too read the instructions. Ended up only put one tyre on backwards. With all the stickers on it looks really cool.

After everyone had finished building Lance revealed the track. It is awesome with different kinds of hazards like stones and steep climbs. It is a figure 8 style track with a battle zone in the cross over.

The racing format was similar to how the Tamiya Mini’s are raced with heats and people getting a second chance. The main difference was that these were head to head races and crashes the track is set up for crashes.

The racing may not have been fast but it was definitely furious. With lots of close calls, crashes and close racing. Thanks to Sally Eyre of Eyre’s Eyes for letting me share some of her photos of the day.

A live stream of the racing was on the Facebook Event. It is now available to watch here or below.

Here is the final race between Brixio and myself, watch to the end to see how close the racing was.

I was very happy to have won this event with the Terrano. The prize for was a set of rare Wild Mini High-Speed gears which I will use in future events. Some basic testing using the stock gears and the high-speed gears showed an increase of of around 4 times.

Again a big thanks to Lance and everyone that helped build this great track and I am looking forward to racing on it more in the future.