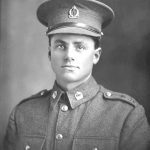 With it being the 100 year anniversary today (4th of November) of the liberation of Le Quesnoy (pronounced Le Kenwah) during WWI. I thought it would be fitting to write a small post about my Grandfather Thomas William Chitty.

Thomas William Chitty was born on the 20th of April 1896 in England. He enlisted into the New Zealand Army on the 2nd of May 1916 at the age of 20. Assigned as 21209 Private, 1st Battalion, Auckland Infantry Regiment. He embarked on the 19th of August aboard HMNZT 61 (Aparima) arriving in Europe on the 24th of October. He ended up fighting throughout France and ended up at Le Quesnoy.

The liberation of Le Quesnoy took place just one week before the armistice ending World War I.  The Germans held Le Quesnoy for almost the entire war. From August 1914 through to its dramatic liberation on 4 November 1918. The New Zealanders scaled a ladder set against the ancient walls of the town and took the remaining Germans as prisoners. The video that Newshub has put together is a great summary of the liberation which is well deserving of a watch. On the CAMBRIDGE LE QUESNOY FRIENDSHIP ASSOCIATION website, there is a wealth of information including the Battle Orders with maps.

Knowing that my Grandfather played a part in such a historical event is quite astonishing. He passed away long before I was born. From what my Mother has told me, he did not speak of the war.

At Le Quesnoy Thomas Chitty earned the Military Medal for his actions on the 4th of November 1918. Below is the citation for his award from the London Gazette. I cannot comprehend the daring that would have involved to push ahead to the buildings while under fire. Then to call for the enemy soldiers to surrender.

For conspicuous gallantry and devotion to duty. On the 4th November during the attack north of Le Quesnoy when the Company to which this man belonged was subjected to rifle fire from houses on the right flank, Pte Chitty, with initiative and daring immediately proceeded with another man to reconnoitre the position and ascertain the strength of the garrison. By skilful scouting under fire he reached the building and effecting an entrance called on the occupants to surrender. During the manoeuvres rifle and machine-gun fire was continuing from the building, but the garrison, taken completely by surprise, surrendered to these two, and as a result 1 Officer, 8 O.R.s [ordinary ranks], and 3 machine-guns were captured here. His skilful and daring action undoubtedly saved many casualties. 1

The Military Medal (MM) was instituted in 1916 during the First World War. It was awarded to non-commissioned officers and other ranks of the Army for acts of bravery for which the award of the Distinguished Conduct Medal (DCM) was not considered appropriate.