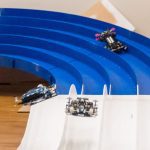 The MINI 4WD New Zealand set a 5 Lane Tamiya Mini 4WD race using the current Japan Cup Circuit as inspiration. It was an amazing track, as the images in the gallery below show. This event was a National trial race, using a new race format. The format was no practice but there are 40 minutes to have up to ten races. To proceed to the finals you need to win one race. The main prize was the Toyota GAZOO Racing TS050 Hybrid in MA chassis. A car that I have been eagerly awaiting general release.

I was double booked for events I wanted to attend. The HVCTC also hosted a Zone Claybird Shoot on Sunday. I decided to go to the Mini 4WD event as I had been quite sick and was still recovering. A day shotgunning would not have been great.

I am happy I went to the Tamiya Mini 4WD race, the track set up was amazing with plenty there to challenge the cars. From the obvious steep climbs to sly pieces of conduit added to the sides and bottom of the track to unsettle the cars. It was the most challenging track layout I have raced on. Lance and Carl Howard did a great job on setting the track up. Lance said it was three weeks of his time after work to build thanks, man.

The vortex changer and you can see the rocking straights added.

The conduit added to the Mohican Straight

Carl giving a rundown on how the event will run.

Watching the kids race the basic class, it was clear that the track was a challenge. In the first few races, no one finished.

For this race, I used my Rayvolf Yellow Special as it has the MA chassis basic tune-up kit plus front under guard and rear brake fitted. I quickly found out it was not up to the task. I could not get it to stay on the track even with a torque tuned motor. The car kept coming off after the rocking straights. With a slower motor, it was unable to climb up the glide 45 banks. I did not want to start adding dampers as I like the look of the car and do not want to modify it. I may have to look at another kit for this class, maybe one of these FM-A Starter Kits.

Here are some photos thanks to Sally Eyre (Eyre’s Eyes Photography) for letting me use them. They really show the chaos of a race.

After having a trial run in the basic class, I thought I had a fair idea of where to go with my main car. I started with the Hyper Dash 3, some brake front and rear with both side and rear mass dampers with lightweight. It almost worked with my first race making it right round to come off at the final corner. This was a good starting point, I ended up slowing the car down a bit so it would definitely finish.

My idea here was to hopefully win one and know I am going to into the finals and use my last races to tune up as much as possible. It worked as it only took a couple of races to get a win. It was time to dial the setting in. I decided to stick with the Light Dash Pro and 3.7:1 gear as it offered the good speed.

The final three, My car is in the middle.

After the pre-races were done I found that my axle bearing was rough, so I cleaned them out with lighter fluid and it rolled a lot smoother. Because of this, I added slightly more rear brake as a precaution.

Having made the finals and see how fast some of the cars were I wasn’t that hopeful to make it through. There were 9 racers that made it through to the Semi-Finals. These were divided up into groups of three with the winner of each moving through to the Grand Final. In my Semi-Final I went against one of the guys that won every one of his heats, using different cars. Early on in our race, he crashed out and I ended up winning it. Meant I got to move to the grand final, I was surprised.

I was getting excited especially to win the Toyota GAZOO Racing TS050 Hybrid. I was in with a one in three chance of winning this car.

One of the fastest cars ended up off the track early again and the other car also came off. All my car had to do was survive and the car was mine. It was not the fastest but my car was there at the end and to finish first, first you have to finish came into play.

I am so stoked to have won the event and the little car that could. My next post on Tamiya Mini 4WD will be me building what looks like a beast of kit it has 56 stickers to go on the body.

Receiving my prize for winning the Adult National Race. Thanks, Lance and Carl.

My winnings a nice certificate

I found the race format very good, gives plenty of racing and enough time to tune to the track. It is better than the one and done kind of racing that I find normally happens. Well done to Lance and Carl on the great idea I am sure it will work well at teh nationals. Unfo,rtunately due to me going to Whanganui to shoot the National Compak I won’t be able to make it to Hastings next year.